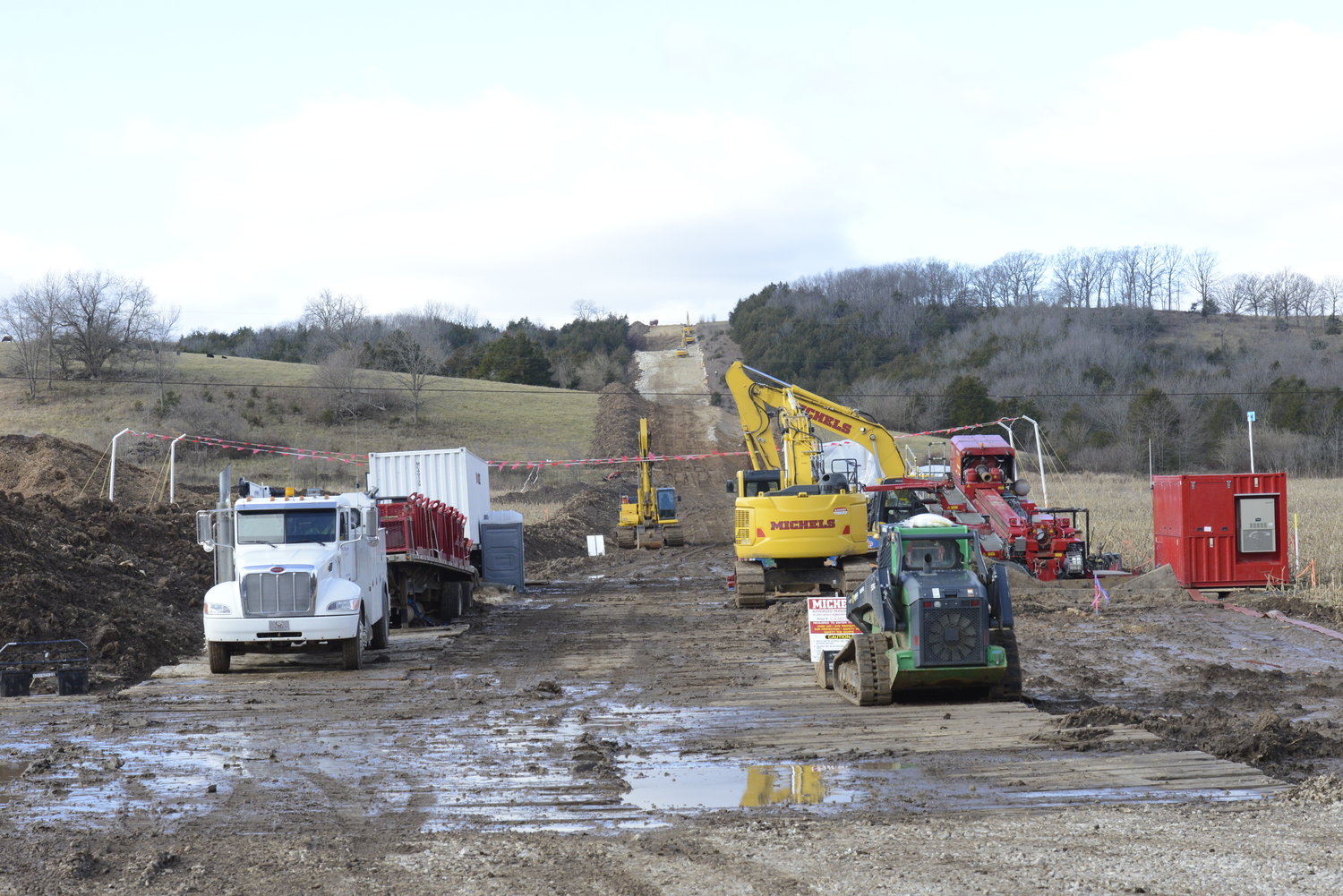 Gus Wagner, partner and creative director at Arc Media of Jefferson City, and Derick Gipson, Mid-Con area supervisor of the Phillips 66 Company in Jefferson City, were on hand last Tuesday to provide commissioners with an update of the 6.2-mile pipeline project.

Wagner gave a brief summary, and both answered questions about the Phillips 66 Pipeline Replacement Project between CR 403 and CR 303. Wagner also provided maps and satellite photos of the area, with diagrams of the construction superimposed.

There will be 6.2 miles of pipe replaced along a route north of US 50. The company has been in touch with every property owner affected by the construction; and it will all end with a restoration program. “It will be better at the completion of the project than when we found it,” Wagner promised.

Much less damage will be done in the beginning, and therefore require less repair. They will occasionally use horizontal directional drilling instead of open trench digging.

The lead contractor is Michels Corporation of Brownsville, Wisc., which is employing 145 workers at this location. They intend to complete their work by March of 2020.

“Is that to be the whole project or just in this area?” Second District Commissioner Larry Kliethermes asked about the completion.

Wagner clarified he was talking about Osage County.

Weather and rock will be the biggest variables. “Most contractors come to Missouri and think they know rock until they get to Missouri,” grinned Gipson. “There could be delays if we run into some certain kinds of rock.”

Chief Deputy Clerk Amber Hamilton inquired for the reason the work is being done. Wagner emphasized the company wants to do this, but doesn’t necessarily need to. The current line is “perfectly fine,” he said. However, the line was laid in 1953. It carries butane and propane. Part of the year, butane runs east to west, with propane running west to east the rest of the year. There are now stronger materials with better coatings. Plus, the new line will be larger, capable of carrying greater volume.

Phillips 66 operates a major depot in Jefferson City. Other pipelines into the depot carry liquid fuels. The Osage County section of pipeline is part of a route from Jefferson City to East St. Louis, Ill. In the other direction from the Jefferson City Depot is a line to Northrup, Texas, 100 miles west of Houston. There are valves every 5-7 miles, and the new line will be buried 4-6 feet deep. The old one is 2-3 feet underground.

A computerized remote is launched through the line every five years. This is called a Pipeline Intervention Gadget (PIG). Computerized as it is, it’s referred to in the industry as a “Smart PIG.” Relaying information ultrasonically and by satellite, it analyzes the pipeline’s integrity and efficiency, graphing any interior crack or dent.

Products unloaded in Jefferson City are trucked throughout the state. Depending on demand, 16,000 to 22,000 barrels a day make their way through the pipeline.

“They should be self-reporting,” Gipson answered, adding that any citizen noticing anything of importance is welcome to call it in. The county should then contact Wagner,who will notify company officials in Houston. The company is working with the Missouri Department of Transportation (MoDOT) for permits related to weight and size.

Hamilton related she has been watching from her deer stand as the equipment works. She’s hunted there for many years, and believes the change in structure helped her see more deer.

“I killed the biggest buck of my life,” she said.

Phillips 66 recently granted aid of about $30,000 for an emergency response upgrade at Loose Creek. The gift was coordinated through Osage County 911/EMA Administrator Andi Rice.